What it means to be “free”

Freedom has been found following Jesus as he resisted the powers of bigotry.

“For to be free is not merely to cast off one’s chains, but to live in a way that respects and enhances the freedom of others.” – Nelson Mandela

This Sunday is one where we pre-celebrate the upcoming July 4th observance of Independence Day, with an air of patriotism, but above all, a recommitment to one thing. Freedom. The very first taste of freedom is what God granted all of us humans when we were given free choice. The ability to favor right versus wrong, prudence versus wretched excess, kindness versus cruelty.

All are welcome to worship with us. Service begins at 10 a.m. 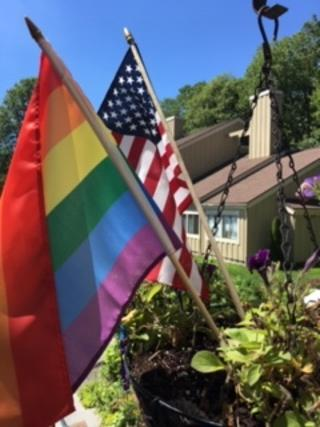 It always amazes me when people, raised in the birthright privilege of American citizenship, manage to forget what that word means, and act in a way that attempts to silence or enslave the voice of someone who thinks or lives differently than they do. Unfortunately, I had a front row seat this past week to that kind of un-American amnesia, and right on the street where I live.

One of my neighbors who has lived here for at least 15 years and who moved to the US from South Africa, has a beautiful English garden he has lovingly planted and tended all these years. Every summer people make a point on their walks to come by just to take in the garden’s beauty. My friend proudly achieved his US citizenship a decade ago. His garden always contains a small American flag and alongside it a small gay pride flag.

Recently a new couple moved onto our street, their car sporting a few Christian Right stickers, and whenever possible, letting the rest of us know they view America as only a Christian nation. They first demanded that my friend dig up half his garden space so that they could plant a tree. And then -- surprise-- the gay pride flag was stolen from my friend’s remaining half of his garden. For the first time since he moved here from South Africa, he felt as if he was the target of discrimination for who he is. However, the outraged response from the rest of us is a classic testimony to freedom. Up and down our street gay pride flags have been popping up, placed by owners in prominent view in front of their own units, proving that sometimes bigotry is just the right fertilizer to increase the yield of respect and brotherhood in this country of ours. Freedom takes many forms.

This Sunday we’ll be looking at what it means to be “free.” There’s the paradox that, during centuries of oppression and enslavement, some of the people who were the most free were imprisoned by people who tried to take away their freedom of the human spirit. And we’ll look for stories in our own lives where freedom has been found following Jesus as he resisted the powers of bigotry. Join us for some soul-rousing music! --- Pastor Pat Kriss

PS: I’m hoping to see you all for a fun evening this Friday for a picnic, great music and humor from Boys In Hats! Dinner at 6 and Music at 7! Be there! (It’s a good event for kids, too.)